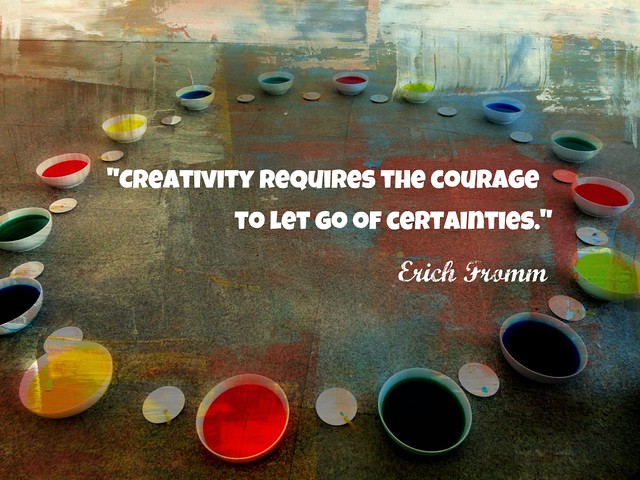 I’m a dancer, well more specifically I’m a dance teacher. And therein lies a fundamental difference. As a dancer I spent years training my body to follow patterns of movement and find both beauty and function in form. But as a dance teacher, I spend my time choreographing – creating. And it’s been here that I have found meaning in dance. 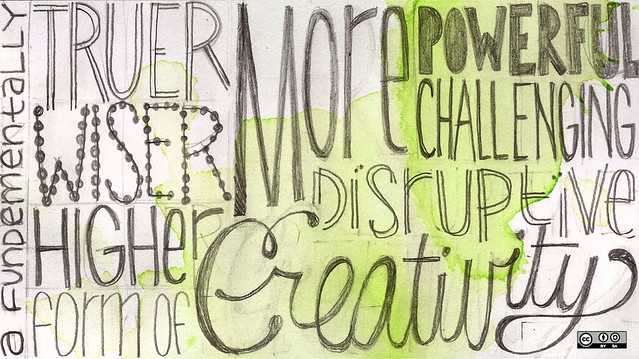 The performing arts are regarded as creative endeavors, but what we don’t always realise is that creativity is not inherent in any of these art forms – it’s a mindset and something that must be given space to develop. If a dance only ever learns what they are taught and never get’s a chance to choreograph – how much creativity are they really practising? Similarly, a musician exposed to the best of classical and modern music is not necessarily creative if they can only play but never compose. What creativity needs in order to thrive is opportunity, and it has not traditionally been then case that students are given time deliberately set aside to be creative. 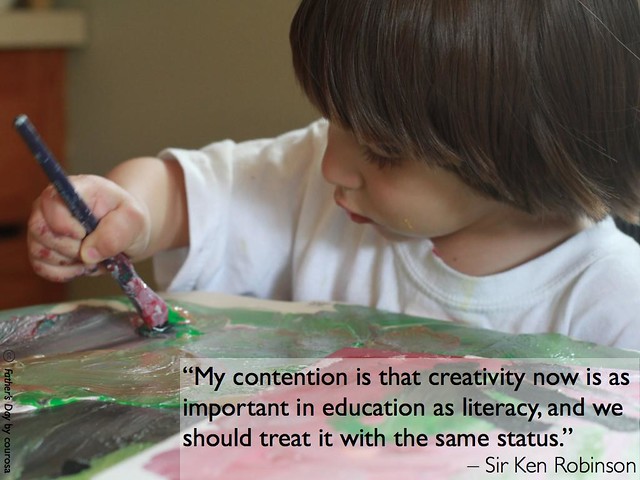 But I believe schools can and should be creative spaces (see Sir Ken Robinson‘s talks for more detailed, eloquent and well researched reasons than I could give) because creativity is important. It’s not only what brightens our lives, and makes for great performances, it’s what keeps us trying new things, it’s what leads to innovative solutions, and new ways of doing things. And most importantly it feed our inner selves. In Kaupapa Maori, they talk about the mana atua, the divine spark that resides in all of us. Opportunities for creativity feed that spark. 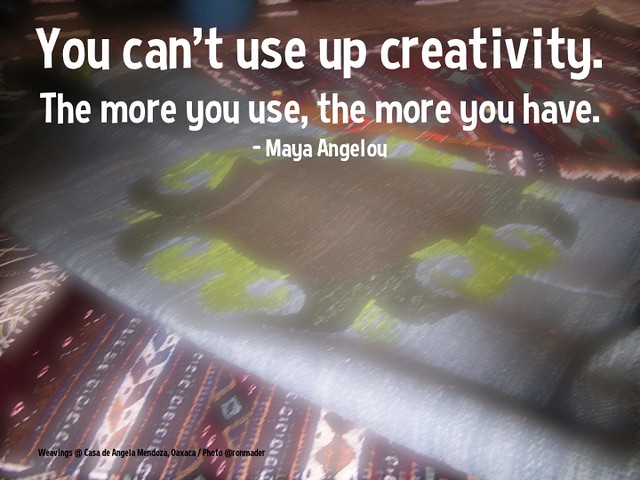 So we now we know creativity needs opportunity to thrive, but we also need to recognise the breadth of areas that it’s possible to be creative in. I have seen students excel in creativity on the soccer pitch, seen brilliant creative reasoning in mathematics, and watched students argue the most intricate details in amazingly creative ways. If we believe that creativity is possible in any field, then we are starting to understand creativity as a mindset. As a mindset, or indeed a disposition, creativity grows in response to practice. Just like years of dance training strengthened my body, years of choreography have developed my creativity too. Practice comes in the form of activities designed to help students think beyond the mundane and into the novel. It’s a question asked by the teacher, but left answered or the thought that starts “I wonder if…” The final thing creativity really needs in order to thrive is constraint. An enabling constraint to be precise. Something which provides a limitation to work around – the creative challenge if you will. Sometimes simply a context, at other times a more explicit requirement. 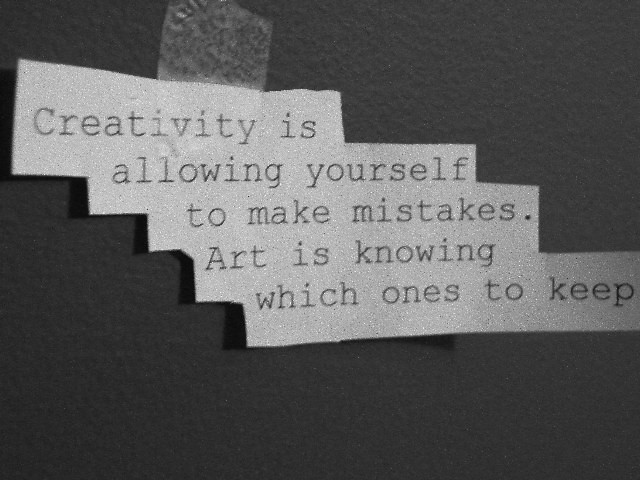 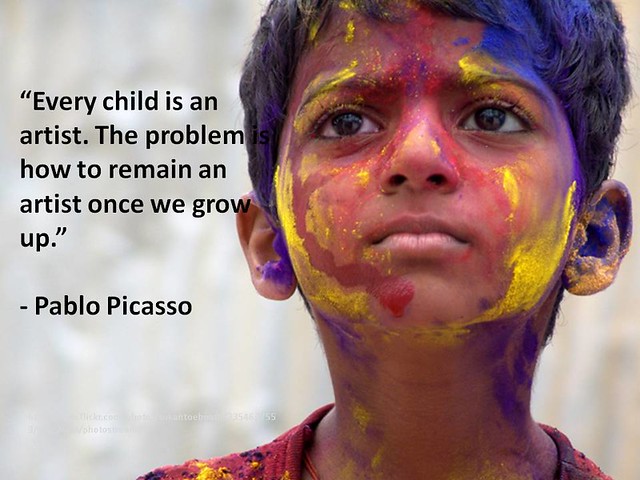 So what does school as a creative place look like to me? It’s a space where student’s ask questions, solve problems and explore ideas. It’s multi-modal and highly interactive. It engages students in creative development. It’s supported by discussion and exemplification of the creative process by students, teachers and industry professionals. It acknowledges that creativity exists everywhere. It’s supported by structures that enable understanding – the SOLO taxonomy, systems thinking – and see everything as part of a whole. It’s developed and practiced through processes that foster ideation and iteration – design thinking, future problem solving. It’s a space where students can learn through doing and trying and failing upwards and failing forwards and starting over and turning the whole thing upside down. It’s acknowledging that there is never going to be one right way.

It’s week two of the holidays and having gone into school today (mostly just for Stage Challenge rehearsal), I’m starting to get my head back into it all. There’s so many things I’m excited about this term, but before I write about them, I want to reflect on the term that has been.

Term one’s are always busy, but last term felt busier than most. There were a lot of new things for me last term. New classroom (with quite a different space and orientation to be last – despite being only 3 doors away), new syndicate, new syndicate leader (who was also new to the school), and most important of all, new learners.

We had the usual things that term ones come with, camp, our 12 hour fundraising run, athletics day and so on, but those (while totally awesome) aren’t the things that stand out for me. There are two things that really stand out. One is student leadership, and the other is student voice.

I run Stage Challenge at my school – we do it every two years and this is the second one I’ve run. I started the first one as a second year teacher on a suggestion from one of our DPs (now principal). I love it, but boy is it a lot of work. The first year was hard, but this year has been so much easier (so far) though still lots of work. I have a lot of awesome teachers who are working away with various groups of students on lighting design, backdrops, and fundraising, but even more awesomely (totally a word by the way) I have an amazing group of students working alongside me to make Stage Challenge happen. These students have spent so many hours choreographing, fundraising, packing costumes, rehearsing students as well as actually dancing themselves. It’s been awesome to see their leadership grow and watch how the other students respond to them.

I’ve also seen some awesome student leadership starting to happen where a couple of my more energetic boys have taken on teaching the class Football; planning and running drills and workshops for the class and me. Imagine how stoked they were when they found out Football is one of the school sports for next term. Headstart anyone?

Student voice is really important to me, but I often find that to give student the level of self-determination and voice that I’d like to can be really overwhelming for them at the beginning of the year, especially for the year sevens. It definitely has been a steep learning curve for some of my students in learning how to make decisions about their own learning, but it’s absolutely been worth it – and that’s only after term 1!

All in all I think the element of choice/voice was really appreciated by my students, though at first they just saw it as more work. Once they got into it further however they were much more engaged in their learning. I think though that I could have provided a lot more supported structure around some of the necessary skills for the projects. I’d like to integrate a better conferencing/workshop structure into this to more proactive in anticipating what’s needed – and I’ve pretty much got that sorted already for next term.

I want to think more around the idea of enabling constraints too. I think some of the tasks were too open to really produce amazing things. I had really good success last year with our Geek On Projects were student could study/research/create anything they wanted as long as they produced a video at the end. The results were amazing. Similarly limiting or banning some modes of presentation (I’m looking at you powerpoint) led to Hunger Games dances (I wish I’d filmed this – it was amazing!) and Divergent board games being created in our literature unit. It was difficult to place these constraints though as it was a syndicate wide task were doing, but something to investigate more for this coming term.

I think the maths projects worked fantastically well this term, the students really enjoyed applying their mathematical skills to something practical, either designing a new layout for the classroom, or creating an orienteering course around the school. And the fact that were are putting these into practice this term, testing out the obstacle course and choosing our favourite design elements to try in the classroom really got the buy-in from the students.

So I think my two things going into next term are looking at how I can create stronger support structures for enabling student choice/voice and enabling constraints.

I am an Intermediate/Middle School teacher based in Wellington, New Zealand. At school I am a year 7/8 classroom teacher, German specialist teacher and the Teacher in Charge of Dance. I love geeking out with tech and am excited to be e-Learning Leader at school for 2014.

This work is licensed under a Creative Commons Attribution-ShareAlike 4.0 International License.